Your One Stop Dental Office For All Your Dental Needs!

Is invisalign right for you?

The first step for anybody considering invisible aligners will be to make an appointment with their dental office. While clear aligners can adjust a large range of alignment issues such as crooked and crowded teeth or incorrect bites, some severely turned teeth may be difficult for them to grip and therefore be largely ineffective. Ultimately, it is only your dentist who can accurately determine whether you are a suitable candidate for invisible aligners. 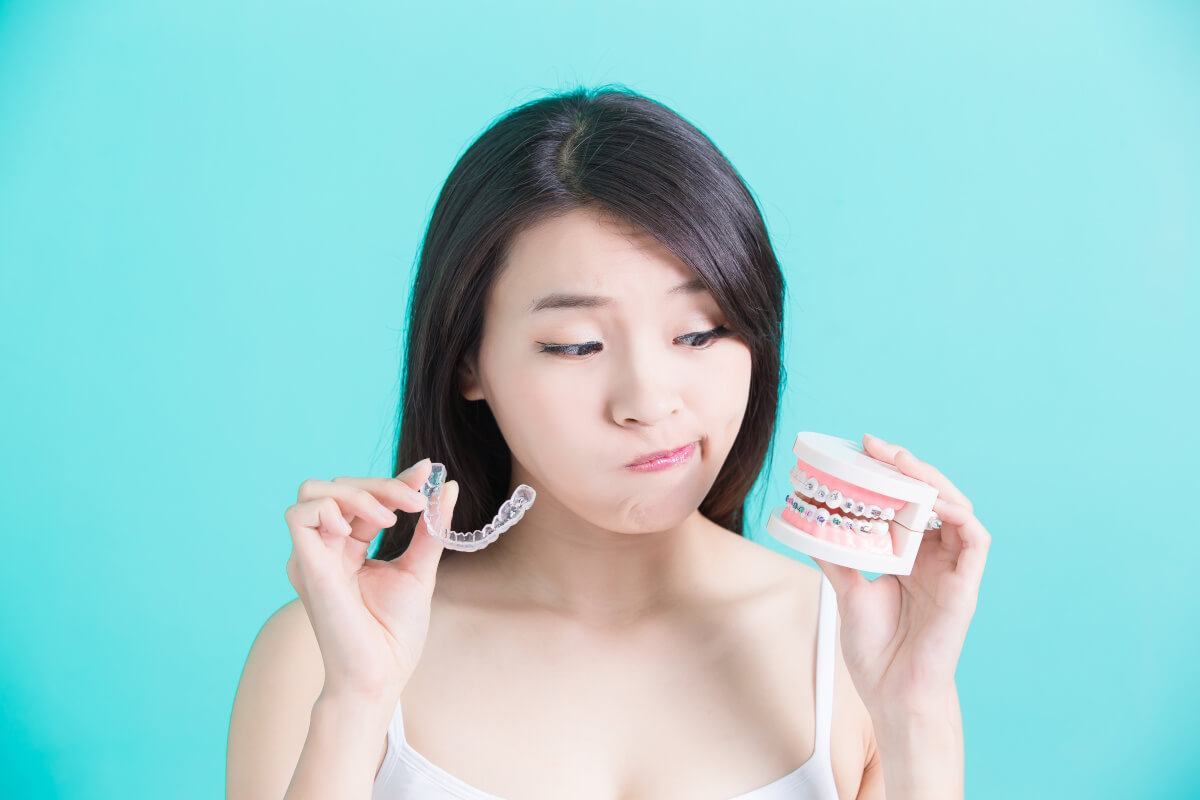 Traditional braces have been around for a long time while invisible aligners are relatively new to the teeth straightening scene. However, they have also come a long way since they first made an appearance in 1945. To be sure, Invisalign is one of the more well-established brands among invisible aligners and has been instrumental in taking the concept into the modern age by creating a software program to create the aligners digitally as far back as 1998.  In order to help you to make an informed decision, let’s take a closer look at each and consider the pros and cons.

One of the greatest and most obvious pros of Invisalign is its aesthetic benefits. These “invisible aligners” truly are invisible to the casual observer, so the wearer can talk, smile, and laugh to their hearts content without feeling self-conscious about exposing a mouth full of metal! Invisible aligners are also removable. This means that there are no dietary restrictions based on chewing ability or fear of food getting stuck in wires and brackets. Maintaining oral hygiene is also much easier than with traditional braces as patients can brush their teeth and floss as normal before replacing the aligner over the teeth.

While both methods of teeth straightening will cause some minor pain as teeth are being moved, Invisalign is the more comfortable option. This is because Invisalign is made from smooth plastic without any metal brackets or wires to poke at the tender inner-cheeks or gums. For the large majority of patients with mild to moderate alignment or bite issues, this alternate teeth straightening technology is well worth considering.

Traditional braces may be a necessity for patients with more severe or complex alignment issues. The metal brackets have a firmer grip on your teeth than the plastic aligners that can slip on some of your rounder-shaped teeth, providing greater pressure for adjustments to occur. Also, because they are permanently attached for the duration of treatment, there is no possibility of patients forgetting to put them back in after removal, which can cause major setbacks. For this reason, this option is generally recommended over clear aligners for children.

Align technology has evolved in recent years, and with the recent emergence of “invisible braces” (not to be confused with invisible aligners), the issue of aesthetics has begun to be addressed. Though not quite as “incognito” as clear aligners, invisible braces are made up of clear brackets and tooth-colored wires to be less visible while being just as effective as traditional braces. The main downside to this is that they do tend to be considerably pricier than both traditional braces and clear aligners.

Invisalign cost varies from patient to patient and depends largely on the extent of treatment. For the most part, treatment costs are comparable to that of traditional braces, with the majority of US cases ranging from $3000 to $5000. Our dental office offers a variety of orthodontic treatment options including traditional braces and clear aligners through Invisalign and ClearCorrect. Contact us for a consultation so we can discuss the best options for your unique case!

To ensure the best dental care & correct time allotment for your specific need, one of our care specialist will contact you to finalize your appointment.